(Part I excerpt from an interview with Lewis Finch)

“What lies behind us and what lies before us are tiny matters compared to what lies within us.” Dr. Steven Covey

A 13-year old boy, starved for love and affection, grew up to become a successful business man and a recovering addict. From the moment he took his first drink, he says his “development was stunted” as he set out on a path that would take way more from him than it gave, no matter how hard he tried to get a payoff from drinking and drugs.

If Lewis Finch would have understood and embraced the famous Covey principle “Start with the End in Mind” he might be telling you a different story about his life right now. However, trapped in the grip of addiction and blinded by his insatiable ego, he had no way to fully and truthfully process what the end might be to his actions. In fact, he didn’t do a good job at processing the beginning or the middle of his journey. His ego driven addiction blocked his clarity; it skewed his perception of what was really happening and left him unable to recognize that he was not in control.

He was addicted to drugs and alcohol. And, for years, he honed a skill that helped him move through the life he chose from himself. That skill was not business – it was becoming really good at supporting his habit and fooling or seeming to fool those around him. He will tell you of the deeply destructive nature of the drugs and drinking and how he used one substance to support the other. As I listened to him tell me his story, there was a little (or not so little) word flashing in my consciousness…ego. I saw EGO – Edging God Out – as the lead destroyer. Egocentric means the state of being self-centered; greater concern about the self than others to an excessive degree.

Moreover, in egocentrism, you’re unable to see someone else’s point of view; but in narcissism, you may see that view but not care about it. Going even one step further, people high in narcissism become annoyed or even enraged when others fail to see things their way. This inflated, broken and false egocentricity or “big EGO” working through addiction told him that he could lie, deflect, and neglect his family because, after all, he was the most important person in the equation. Often, underneath heightened pride, arrogance and EGO is actually immense guilt, shame, and fear of abandonment – an insidious prison that can entrap people into hiding addictions at all costs. The addiction lie is you cannot live without it, but actually it is really killing you. Whereas a healthy or healed ego learns how to integrate love of self and love of others.

Certainly, a leader’s inflated ego can take one down a phantom path of “managing” by speed boxing the air that ends in destruction. That path looks even more inviting when you are trying to balance success, family, power, goals and making money. You may be tricked into thinking that you can do it all, if you just stay strong. Attempts to manage stress can make you vulnerable to addictions causing one to be driven instead of led by grounded clear choices, wise implementation and consistent positive action. There are certain behaviors that C-level leaders may default under unmanaged stress, which is the antithesis to grounded leadership.

What Addictions Call Your Name?

For Lewis, the addictions or compulsive behaviors that made his life unmanageable, were drugs and alcohol. Addiction can be described as a physical and mental dependency on a particular substance with an inability to stop taking it without incurring adverse effects. What addictions or addictive behavior might be driving you beyond substance abuse? Ask yourself, if you or someone you know, may: 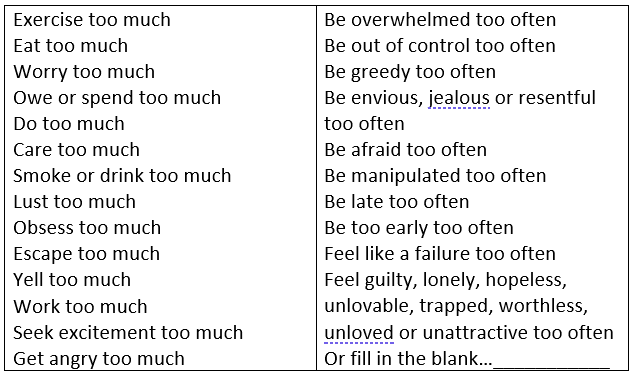 What are your tendencies toward excessiveness?

It is human nature to develop survival skills so you can live through trauma, dysfunctional families, abuse, or difficult situations, although those coping mechanisms that also helped you build success, in part, can morph into something darker and drive you right off the road. Are you paying attention? How are you managing the ever-persistent EGO with its deceptive message that you are the center of the world? You might say, “come on Cheryl my EGO is not driving me or being destructive.”

Consider these thoughts – have you ever had them before?

· I Work 15 hours a day to take care of the cost of putting kids through college.

· I obsess over every detail of the company and micro-manage because I want things done right. I trust my team, but I can’t depend on them to do things a well as I would do them.

· I put my wife/husband second or third because she wants to be supportive of me, and I certainly only snap at her or the kids because I’m blowing off steam…they understand.

· I only drink a couple of glasses of wine after work to relax. After all, I work hard. I deserve it.

· I don’t need to watch my spending. We are making so much money right now that I know it will all even out down the road.

· I hang out with people from work after hours so I can get more business done.

· Overeating makes me feel numb and helps me turn it all off. I will be okay.

· I like to see my bank account go up. I take a little time away from the family. I will make it up to them one day.

· Having power is important to me. Having money and power is even better.

· I hate to break my promises to my family, but I’m a busy person.

If any of these statements sound familiar, you may be drunk or high on BIG EGO and heading toward a crash that will take you over the edge, not just to the brink of it. Denial – declaring something to be untrue – can be a survival mechanism as well. However, are you ready to become willing to be honest with yourself in this moment?

Addiction is a progressive illness that can subtly build over time.

How do you handle the EGO addiction? The same way you handle addiction to a controlled substance – you have to get sober. Getting sober doesn’t mean stopping the behavior for a short time. It means making a life-time change so the thing or things that hold you captive are realized and identified as destructive. This work is best done one day at a time and some days, moment by moment, with others on the same journey.

Thanks for reading! Want more content? Read more on our blog here! Have questions about where to start with C3 Advantage? We’d love to talk with you!